Made reservations for two in Red Crab for our Fridate night. We arrived there at the prime dinner time of 730 PM but the place was empty. It’s a symptom of an upper-mid-end resto being located in Venice Piazza, which is surrounded mainly by IT and BPO offices and some residential buildings. 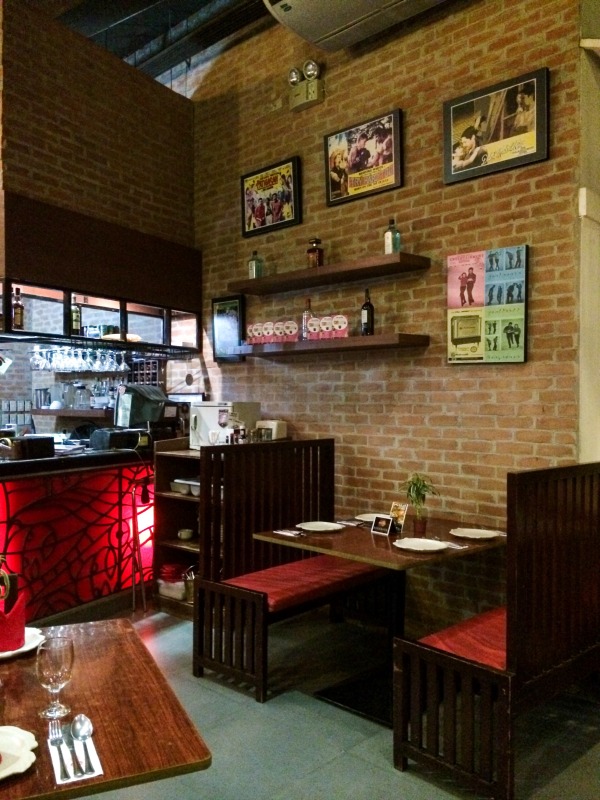 We took our seats on the booth banquette in a hallway that leads to the kitchen.

Despite their name suggesting that crab’s their specialty, we felt that sharing one would be too much as we wanted to try their other courses. As a consolation, we settled with the Crab and Mango Salad (335 PHP) to have a bit of that crustacean meat in our starter.

Not long after, the waiter came carrying a large bowl that showcased a big salad serving.

The fresh-looking lettuce felt aptly cool the second it touched my tongue. They were coated in a sweet fruity dressing with minced onion sparingly mixed in. The chunks of mango were moderately sweet and with just a hint of sourness. The shredded crab meat mmm-melted in my mouth that I wished there was more as it was only a fraction of what was atop the salad greens in the menu picture.

The difference in portion reminded me of what I call “Commercial Food Models”. For menus and advertisements, the volume of ingredients is enhanced and food is beautified through food styling before being photographed.

Take the case of fastfood burgers on ads. They look big, shiny, and perfectly put-together. Food stylists were hired to spray oil or steam on the patties for the gleaming effect, while the other ingredients are carefully positioned on the edges for high visibility. The preparation and arrangement takes hours to make the food visually appealing. Read more about it here: http://www.gourmetads.com/blog/food-styling

So that explains why food models vary in degrees to the actual ones provided for consumption (apart from much shorter prep time).

Pardon my digression. Now on to the next…

The Manila Chicken (325 PHP) that we ordered also contrasts with the food model but in a another way. Although I enjoyed the well-marinated and tender chunks of chicken (with some crunchy surface too!) that were drenched in sweet barbecue sauce, I wondered why they didn’t prepare fillet instead (as in the menu photo below).

The java rice with minced tomatoes (though appearing paler) was a very good complement as it was somewhat moist and fluffy. (Rating: 8.5/10)

The Hot Malaysian Prawns (450 PHP for 200 grams) was recommended when I inquired which had sweet and salty sauce.

Later came this rectangular plate bearing 7 pieces of small prawns garnished with minced garlic. The sauce was fairly sweet but dominantly salty and had a spiced and mildly gingery flavor. Despite the red chili pepper bits scattered around, it wasn’t at all spicy. The prawns were slightly overcooked as parts of the shells were soft and a little difficult to remove. Nonetheless, it was generally decent. (Rating 7/10)

Given a scrumptious and filling dinner of distinctive dishes with satisfactory quality and portions for the price, we’d be keen to go back for another date night at the same Red Crab branch.

Service-wise, the restaurant staff were adequately attentive and pleasant.

I'm currently a Corporate agent, a Poker player, and an investor. I have quite a wide spectrum of interests and have been bold in pursuing them in order to fulfill a dream, to feed a curiosity, or to live out a passion. I am usually found to be constantly exploring with my mind or with my feet. Given this medium (your glimpse of my world), I am enthused to express in words and in images a bit of my learning and my discoveries and to hone some raw skills which I hope will display progress as I go along.
View all posts by Angel →

2 thoughts on “Fridate @The Red Crab”